HPD brings a familiar face back to the force

HATTIESBURG, Miss. - The Hattiesburg Police Department (HPD) sworn in Ross Kinsey Tuesday who used to work for the department as a patrol and DUI officer. Kinsey left HPD to work for the Lamar County School District Police Department, but decided to come back. "I missed being in Hattiesburg. I missed working for the citizens of Hattiesburg and the community here. My heart was here, so I came back," said Kinsey. Kinsey worked for HPD from 2011-14. He worked as a school resourc 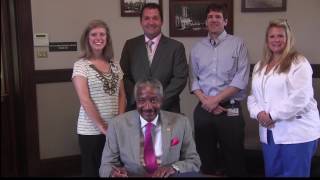 Southern Miss will host its first regional since 2003

HATTIESBURG, Miss. - Southern Miss lost to Rice Sunday in the Conference USA Championship, but the team has moved on from that. The Golden Eagles had their regional watch party Monday at Mughshots Bar & Grill where the team and dozens of fans celebrated together when it was announced that Southern Miss will host its first regional since 2003. Head coach, Scott Berry said, "Everybody's got a new sense of urgency about themselves. This is a whole new season for everybody. 64 pe

JACKSON, MS. - A memorial weekend shooting spree has claimed the lives of 8 people, including a Mississippi Deputy Sheriff authorities said. Officials said Willie Corey Godbolt, 35, of Bogue Chitto had a domestic argument at his in-laws house where his wife and their two children stayed. Lincoln County Deputy William Durr, 36, responded to the Saturday night call and was shot to death. According to authorities 3 other people were also killed at the house, but Godbolt's wife a

LAMAR COUNTY, MS. - An 11-year-old boy from Jackson drowned during Memorial weekend while on a family outing near Lumberton. Officials said Dakon Quinn was walking along a dock at Little Black Creek Campground and Park when he fell into the lake and never surfaced. The drowning happened Saturday afternoon while family members and relatives were holding a reunion near the lake. According to authorities it took divers using sonar equipment nearly 24 hours to recover the body. Q

HATTIESBURG, MS. - The city of Hattiesburg held its 34th Annual Veterans Memorial Day Service downtown Monday morning. The ceremony was held at the Veterans Memorial Park and highlights the military members that have died and fought for our country. Mayor Johnny DuPree said, “The reason we enjoy the benefits of being an American is because people volunteered or drafted and took the ultimate sacrifice.” Camp Shelby's Museum Director and ceremony's guest speaker, Chad Daniels s

Seminary honors those who have paid the ultimate sacrifice

SEMINARY, Miss. - Seminary had its annual Memorial Day service Monday where dozens of people honored those who have paid the ultimate sacrifice. Seminary has lost more service members in wars per capital than most cities. District 90 State Representative, Noah Sanford said, "It's important to remember because without them we couldn't be able to gather here today freely, and I think we all have a part to do in keeping the country worth fighting for. This is a very strong, very

Local election commissioner claims someone is trying to hurt him

HATTIESBURG, Miss. - A 19-year-old elected official claims someone is trying to endanger his life by putting burn marks on his tires. District 1 Election Commissioner, Tyler Wood said he is trying to show the community that Forrest County elected officials are not doing what is right for the people, but for themselves. Wood also said Forrest County politicians do not like him. "Nothing is going to stop me from fighting for the people. The only way they're going to stop me is

Daylilies attract dozens of people to the Hub City

HATTIESBURG, Miss. - The National Daylily Organization is hosting a two-day meeting at the Lake Terrace Convention Center this weekend. Friday was the first day of the Region 14 gathering where dozens of folks from Alabama and Mississippi communicated with one another and saw other people's daylilies. American Hemerocallis Society President, Nikki Schmith said, "There's a saying in our society that you come for the flower, but you stay for the people. I think that's really tr

|This is a press release from the Mississippi Department of Transportation JACKSON, Miss. - In an effort to help prevent motorcycle crashes, deaths and injuries on Mississippi roadways, the Mississippi Department of Transportation (MDOT) has joined other organizations in recognizing May as Motorcycle Safety Awareness Month. Motorcyclists have all the same rights and privileges as any motor vehicle driver on the roadway. During Motorcycle Safety Awareness Month in May - and d
{"items":["5f7dfc1c2dcd700017bd8eee","5f7dfc1c2dcd700017bd8eef","5f7dfc1c2dcd700017bd8ef0","5f7dfc1c2dcd700017bd8ef1","5f7dfc1c2dcd700017bd8ef2","5f7dfc1c2dcd700017bd8ef3","5f7dfc1c2dcd700017bd8ef4","5f7dfc1c2dcd700017bd8ef5","5f7dfc1c2dcd700017bd8ef6","5f7dfc1c2dcd700017bd8ef7"],"styles":{"galleryType":"Columns","groupSize":1,"showArrows":true,"cubeImages":true,"cubeType":"fill","cubeRatio":1.3333333333333333,"isVertical":true,"gallerySize":30,"collageAmount":0,"collageDensity":0,"groupTypes":"1","oneRow":false,"imageMargin":32,"galleryMargin":0,"scatter":0,"rotatingScatter":"","chooseBestGroup":true,"smartCrop":false,"hasThumbnails":false,"enableScroll":true,"isGrid":true,"isSlider":false,"isColumns":false,"isSlideshow":false,"cropOnlyFill":false,"fixedColumns":1,"enableInfiniteScroll":true,"isRTL":false,"minItemSize":50,"rotatingGroupTypes":"","rotatingCropRatios":"","columnWidths":"","gallerySliderImageRatio":1.7777777777777777,"numberOfImagesPerRow":1,"numberOfImagesPerCol":1,"groupsPerStrip":0,"borderRadius":0,"boxShadow":0,"gridStyle":1,"mobilePanorama":false,"placeGroupsLtr":false,"viewMode":"preview","thumbnailSpacings":4,"galleryThumbnailsAlignment":"bottom","isMasonry":false,"isAutoSlideshow":false,"slideshowLoop":false,"autoSlideshowInterval":4,"bottomInfoHeight":0,"titlePlacement":"SHOW_ON_THE_RIGHT","galleryTextAlign":"center","scrollSnap":false,"itemClick":"nothing","fullscreen":true,"videoPlay":"hover","scrollAnimation":"NO_EFFECT","slideAnimation":"SCROLL","scrollDirection":0,"scrollDuration":400,"overlayAnimation":"FADE_IN","arrowsPosition":0,"arrowsSize":23,"watermarkOpacity":40,"watermarkSize":40,"useWatermark":true,"watermarkDock":{"top":"auto","left":"auto","right":0,"bottom":0,"transform":"translate3d(0,0,0)"},"loadMoreAmount":"all","defaultShowInfoExpand":1,"allowLinkExpand":true,"expandInfoPosition":0,"allowFullscreenExpand":true,"fullscreenLoop":false,"galleryAlignExpand":"left","addToCartBorderWidth":1,"addToCartButtonText":"","slideshowInfoSize":200,"playButtonForAutoSlideShow":false,"allowSlideshowCounter":false,"hoveringBehaviour":"NEVER_SHOW","thumbnailSize":120,"magicLayoutSeed":1,"imageHoverAnimation":"NO_EFFECT","imagePlacementAnimation":"NO_EFFECT","calculateTextBoxWidthMode":"PERCENT","textBoxHeight":0,"textBoxWidth":200,"textBoxWidthPercent":50,"textImageSpace":10,"textBoxBorderRadius":0,"textBoxBorderWidth":0,"loadMoreButtonText":"","loadMoreButtonBorderWidth":1,"loadMoreButtonBorderRadius":0,"imageInfoType":"ATTACHED_BACKGROUND","itemBorderWidth":0,"itemBorderRadius":0,"itemEnableShadow":false,"itemShadowBlur":20,"itemShadowDirection":135,"itemShadowSize":10,"imageLoadingMode":"BLUR","expandAnimation":"NO_EFFECT","imageQuality":90,"usmToggle":false,"usm_a":0,"usm_r":0,"usm_t":0,"videoSound":false,"videoSpeed":"1","videoLoop":true,"jsonStyleParams":"","gallerySizeType":"px","gallerySizePx":680,"allowTitle":true,"allowContextMenu":true,"textsHorizontalPadding":-30,"itemBorderColor":{"themeName":"color_15","value":"rgba(0,0,0,1)"},"showVideoPlayButton":true,"galleryLayout":2,"targetItemSize":680,"selectedLayout":"2|bottom|1|fill|true|0|true","layoutsVersion":2,"selectedLayoutV2":2,"isSlideshowFont":false,"externalInfoHeight":0,"externalInfoWidth":0.5},"container":{"width":680,"galleryWidth":712,"galleryHeight":0,"scrollBase":0,"height":null}}
1
2
345